skip to main | skip to sidebar

Printed media enclosures are a custom in Grece many years ago . Below you will find some of the facts concerned with the history of media enclosures , by the amateur view of a media observer looking regularly the local newsstands, and referring with approximate times

Here is a short parenthesis that refers to the status of piracy in Greece that explains in short the reasons media entered into these offers . In its 2006 edition IFPI showed a 50% level of music piracy for Greece , ranking them one of the top 10 countries in earth in piracy level. But considering that the lower salary todays in Greece is Eu 750 , the price of a legal CD is at least 20, is too expensive . The pirate CDs sell for Eu5 with pirate DVDs around 7-10.As far as I can remember this was also a quite long 'tradition' still from the cassette time , when tapes on 70s and 80s were sold in …baskets. But with the worst ever audio. Even music shops those old times had higher earnings selling cassettes recorded from LPs in their semipro decks . Today most of the market is driven by several mega stores in the main centre of the city and African people selling pirate copies Nearly all traditional music shops have been disappeared (except some selling only 'vintage' LPs )

The start of media enclosures came from 2 magazines of the early 90s using material in their monthly issues:

· A cinema magazine offered a video tape with selected movies of the artistic/alternative cinema. This magazine still continues

In about 95-96 a small size TV magazine was the first offering , a song collection, in each weekly issue , from popular singers in CD with full plastic cover . However in about 1- 1,5 year after , the magazine ceased its publications due to unknown reasons , possibly due to low market

Those times , if I am not wrong , was the times of coupons . One of them highest selling newspapers offered with ca 40 +10 spare coupons a big collection of classic music and little later another collection with operas,

This practice arose the interest of other magazines and publications including … detergents and other commodities to sell music CDs from that time. As for example a newspaper called El Typos , offered for several weeks one Cd with traditional song collection. Dixan the well known detergent offered Latin hits.

IN ca 2004 Eleftherotypia a left wing newspaper, "offering for the knowledge", as per their motto, was the first newspaper offering one VCD for free, with documentaries from National Geographic channel, in its Saturday issue. CDs were offered in carton envelope designed with pictures of the documentary . This collection has been replaced with history documentaries from BBC and later with movies from alternative stage

Imerisia , an economics newspaper, their offerings successor, in its Saturday issue offered DVDs from their collection ,mainly alternative movies , from the national and international cinema. This offer was with ca 2 Euro markup price , compared to the plain newspaper. It used the standard (thick )plastic DVD box

The next newspaper was Ethnos, offering selected movies from alternative stage , but soon changed the package into CD envelope with mainstream movies ..

From 2005-6 and then , nearly all newspapers and magazines (more particularly TV mags ) use CD/DVD offers in their weekend issues with mainly blockbuster movies :

The only exception is for Kathimerini , a center line -politically- newspaper that continues to use the traditional 40x 60 cm format , uses documentaries from various sources including National geographic /BBC.

And here are the most interesting cases form the nation-wide newspapers and magazines nowadays : 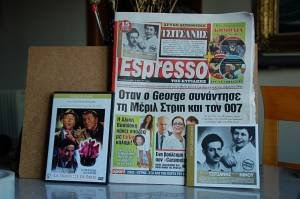 Espresso , a gossip newspaper , in mid 2007 in its Sunday edition , started offering a compilation of hits from Greek singers and still continues .. From their 30th iissue they offered a series of movies from classic comedians, as eg Luis de Funes . Starting March 2008 , its Saturday issue includes a full album from legendary western rock groups Among the groups are Boston , Judas Priest, Saxon and others 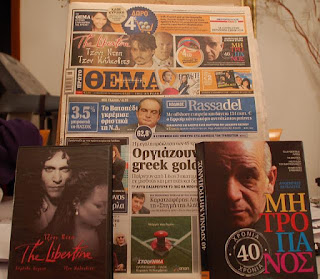 Thema , the highest sold Sunday newspaper, offers blockbusters and sporadically Greeks. Movies passed via this newspaper are Zorba the greek, Miss Congeniality , Lake house , Blue velvet , Finding Neverland, Die hard 1 / 2 , keeping mum, View from the top ,Enemy at the gates and more Several fo these movies have after half and more year aired in the Greek television.In the mid November hey offer 4 Cd albums from well known singers ,one per week . Here on the right corner is Mitropanos one singer of more than 40 years of singing history 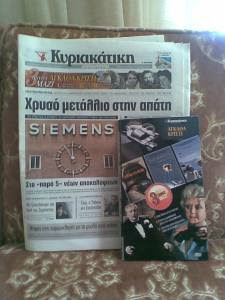 Elefterotypia the above referred very popular newspaper ,once per month , offers a thematic 3-movie subject collection. There are famous movies but of the era of 90s and then. Several subjects so far included for Nazis , Agatha Crhistie , UFOs ,time plays ,thrillers and more subjects to follow. On the pic is the 3 DVD collection of Agatha Christie 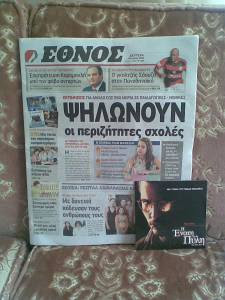 Ethnos the above refered newspaper on August 08 offered for the whole month each 'working day' from their stock 'material' including from Thema's collection, that has more recently been acquired by Ethnos. They still continue to offer each Sunday with newer DVDs 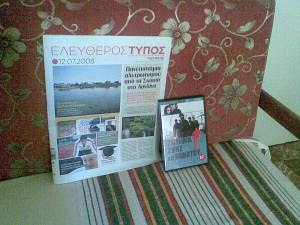 On August 2008 everyday they offered one CD or DVD from their collection with Greek movies each Saturday for example , or international movie each Sunday.

Vima the most selling nationwide newspaper(after Thema ) , offers classical music every Saturday with the auspices of Deutsche Gramophon

Zapping : A quite popular TV magazine . In its 'full edition', they offer a 4 CD collection from popular singers , with 2 Cds each issue . Cost of full 4CD case € 14 .

Tiletheatis : With contract with Finos - a famous Greek movie studio - they offer a Greek blockbuster movie from 60's Cost per issue: €7 comparing to 1.5 for magazine alone.

A series of publications, owned by a group that owns a TV channel , a book and mag /newspaper publishing house and several radio stations. . 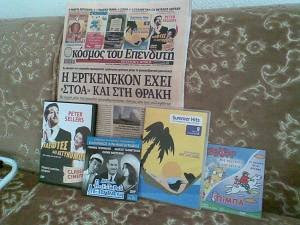 The publishing house called Modern Times , publishes the economic newspaper Ependitis (investor ). Starting from ca 2005 it offered in its only Saturday edition , one Greek movie of 60s in dual DVD , one cartoon in VCD and several pamphlets. A total of 10-11 offerings. The CDs and DVDs are offered in carton envelopes. The newspaper stopped the Greek movies offer in the number 116 and then replaced with music CDs in slim DVD plastic case

The second side of the above dual DVD series was with one b/w English movie (40-60s? ), replaced then Italians and 'western spaghetti movies' (cowboys etc ) then with Sherlock Holmes (inspector )type series,(as well Rex the dog and Maigret ) etc

As for summer 2008 the newspaper offers two audio CDs , a summer hit collection of 12 CDs with 20 songs each (10 Greek 10 American of 60s ) and one CD with Greek poets . From September 08 they offer a collection of 30 Cds with rebetiko , the older greek folk format .On late Novemeber thay also offer DVD from international cinema with a total of 4 DVDs per issue! 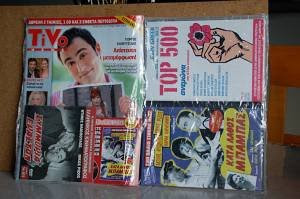 The company publishes a weekly TV program magazine TiVo on start 2006 in two editions. The full edition costed €3 and offered a dual side DVD for about 40 issues in carton envelope . The first side was with series of movies from famous actors. The second side with epic movies from Cinecitta and classical 'western spaghetti'. They then replaced the dual DVDs with simple Dvds offered in slim plastic case and raised the price to 4 Euros . IN more recent issues they offer 3 versions (1) a reprint of an old music magazine with 'western' music , together with one CD with 20 songs of 60s at price of 5 euro (2) version with old dramas and another from their collection and little later (3) a series of cooking guides (book and DVD ) with a diversification of targets for the 60s albums between Athens and remain Greece . and possibly due to low audience 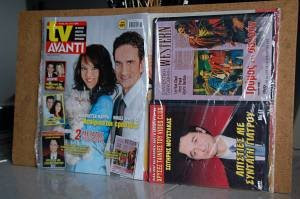 Their newer magazine Avanti , started as a gossip magazine on early 2007 , offering one Greek movie of 80s (mostly comedies). After 10-15 issues they offered a second disk with music collections from their radio stations and more recently a reissue of the mini series of Franco Jefirelli , Jesus. but continuing their 80s offer. From nearly end of 2007 they re-ofered movies of 60's in slim plastic case with western spaghetti movies together with the continuation of the series of 80s movies

This company is totally full issue minded. I once asked the company for buying several of their older Greek movie DVDs and they insisted selling me the full edition of Ependitis or Tivo !!! (magazine with all the enclosures )

Another drawback for this media group: most of their DVDs had flaws in the video processing ,especially for the 2007 period.

Another example of same company are the two music magazines: Difono and Oasis . Both of these magazines are offered with 3 music CDs.

Difono is an old music magazine that recently entered into this group of companies in a big paper format 8.5 x 12” . Its main orientation is in the alternative music, though ther new ownership intends to enter it to the mainstream music too. 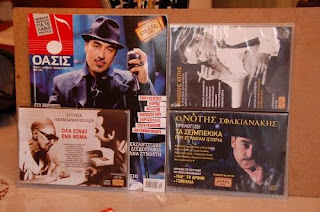 Oasis is a new magazine devoted to the Greek folk music, edited by a specialist in this field . Most articles are old interviews but it also discusses on today’s popular and secondary Greek singers. Also article previews of new release albums In the picture is shown the Dec's Issue with Notis Sfakianakis (oneof the top singers from mid-90s ). ON the right bottom corner is a compilation with his preferences , including comments by him.Other albums are selections from wide known composers of the past 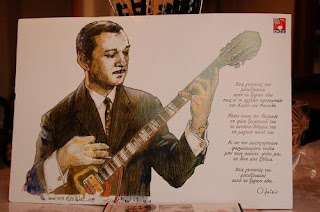 On the same magazine set , on the rear part of the packing,the supporting cardboard is printed with a painting.Ther picture here shows Chiotis a very popular singer and buzuki player of the 80s together with a samll epic for this 'giant' 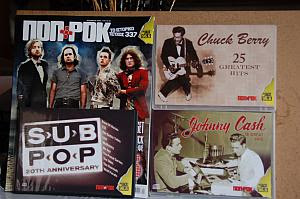 And more recently the group acquired one of the oldest music magazines in Greece `Pop and rock' magazine is now on its issue , using again the same selling format. As for example for the pilot issue there are 3 Cds with music as shown in the picture at left.


By closing the subject , I asked a lawyer about the legality status of these offerings . His answer is very clear: These Cds /DVDs are absolutely legal as the CDs and DVDs offered in the stores .