skip to main | skip to sidebar

Please supoprt the author by sharing  this link! 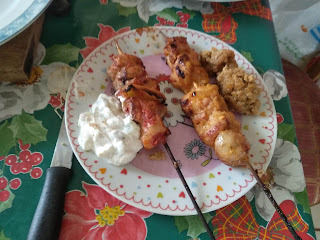 This   is  competition article  between two  contestants : The greek suvlaki and the malay satay.Both counties  have a very long tradition in cooking mean in any form.

I m not good in cooking history and  i m neither itnerested . The text below is only for showing you he process i made to colect the ingredients, cooking it and finally checking the tasting results of two difrecnt cuisines for nearly the same species .The original malay recipe has been  found from  rasamalaysia   a well known malay cooking site owned by Bee a female food  blogger and chef.

The collection process  has been made in two steps. It was discussed with my relatives one week before soall have the same  time   testing  both kinds of  satays. we decided that Saturday 19 May 18 would be the perfect day for cooking them

On May 15th i have searched  in a frinds deli- market store some uneasy  asian things avaialble  only to selected  stores in our city ,Salonica. Greece  is still under austerity conditions  and many comapnies after  2012  stoped operations.  Today after 8 years of austeriry  there is the sole  importer delivering asian ingredints  to restaurants as part of their processed world food imports There are still several  things as fresh lenongrass that cant be found so easily . Fortnately the prices are very cheap especially for the thai ingredients.  Kaffir leaves can be found with 80c fir 35 grams Dreid galangal is a bit more expesive  at 1.5Eu for 60 grams They are not used  in this recipe but soon i  will try Bee's  recipe with chicken rendang my fav indonnesian food which  wilbe also reviewed.

Friday 18 i bought raw (uncooked) chiken satays from the market with skewers , a small plasic box with commercial  jajiki ,a sauce mede by yughurt and cucumber,     unpacked (bulk) peanuts adn returned home for the process.  In Greece  these  met filled skewers are called souvlaki ,called from suvla ie skewers  used to keep them into a  line. It was around 1.2  kg total weight or 12 skewers that were later separated into two  parts of 6 . One of thse parts was given to my mom in law for making the greek version ie oiling it  and adding sime spices , She prefers to use coriander instead  of oregano or thyme  which is the 'norm' if i can call this way . 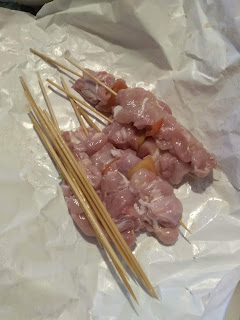 The photo  shows the typical sandwitch satays with thin skewers. Another buther prefers to use  fvery fat skweres with nearly the  double size of meat.

Around late afternon  7 pm while in  house i prepared  the marinade required for the malay satay
The recipe is there Please visit the page before continuing   : https://rasamalaysia.com/recipe-chicken-satay/

My relatives have various health probelms.  My father in law has probems in his stomach  , my mom in law does not eat hot   meals. I replaced the chilli powder with red pepper powder,  fresh  lemongrass with powder. Shallots with onions , Sugar with fructose in the half dose because it is two times sweeter.

The mixture was then blended  in the food prcessor .
The  flesh from the 6 skewers  was removied  and  mixed with the marinade in a bowl and left  in the fridge  overnight. Notice that the skerwers  contained also tomato and pepper that was removed form the half satays. 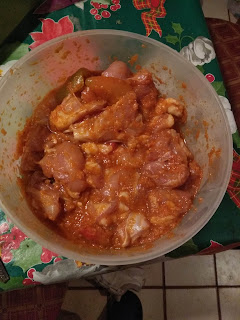 The photo shows the marinated meat

The next day was the preparation of the remain . MY mom in law cooked the spiced suvlakis on noon while  i prepared the peanut sauce . The recipe for the peanut sauce is here :https://rasamalaysia.com/malaysian-sataynow-with-peanut-sauce/

The sauce was  made with smaller portions that filled a Chinese soup bawl.The salted peanuts replace the  salt of  the recipe.  The 50+gr of oil as noted  was too much forme and I used about 20grams   Lemon grass was replaced with  powder and a bit of lemon sqeeze.
The peanuts were not grated  corsely in the blenderand couldnot been pulverizesd. It was cooked on the hot plate  for around 5 minutes and another 5 minutes with plate switched off 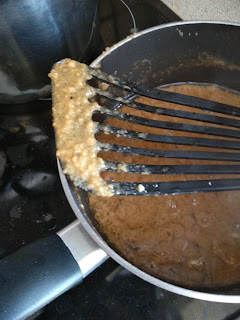 ...adn then kept inthe chinese soup bowl untill for use . Just notice on onhow coarse is the pulp. 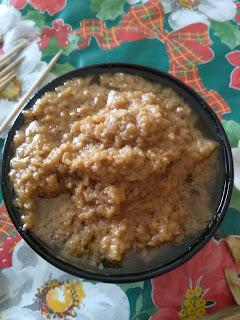 The satays  were cooked in the oven for 15 and 10 minutes (down up ) then sepparated one per one wit the greek a  smalldose of jajiki and  peanut sauce as in the photo below:

I used mine by putting the sauce over the malay satay.

Here are  the  responses witgout refering to names except me and my wife.

-Myself -malsy satay  was really more sweetr than  required. Just 1 spoon of fuctose was enugh  to make it quite sweet. ti was also softer than the  greek. The peanut sauce was quite oiled with the leess than 20 ml used for cooking it > Obviously the peanuts prodced some oil therefore the real oil was rather unnnecesary. Its  taste was  OK a bit better then previously , arond 2 yeas ago whe i used a recipe from a english booklet  with Indo recipes.

My wife : nearly the same as with me

Person 1: jajjiki was  commerical  that means not of very good quality adn a bit more pungent due to higher dose of garlic. That happens  because we prefer to make jajiki by ouselves as its vey easy to do. Bought for saving the cooking time. For this reason the pnanut paste was better. The satay is very soft and sweet  , softer than the greek tha was grilled in oven with air.  The peanut sauce was  fited perfectly for the satay and was 'fat' .

Person 2:  Very tasty to use as real dip for my bread. Satay  is surely fantastic a bit sweet, juicy with beter taste than the greek.  Peanut sauce is somthing i  first time tested.

Person 3: Great  satays ! The best! The sauce is very strange to me!

--
Update: I made again both recipes   for my family two days after using fat skewers grillewd  for 15 + 15 updide down  + 3 minutes in the oven

There were two minor changes :
1. adding cumin to both parts of the dish : satays and peanut sauce
2.marinade was rather short fro the size for  the chicken material  and i added a new dose with the half portions of the recipe adding several lemongrass leaves before blending   Finally the  marinade exceded the satays and used separately in the grillling around one tablespoon  .
3. for the peanut sauce i added half spoon cumin in the paste and lemongrass powder as fresh lenongrass is not avaialble , suger was  replaced with two small sachets of brown sugar. Virgin oilive oil eas used for cooking the spices arond 2 tablespoons Instad of chilli powder i used half spoon of my handmade Sriracha.
4. I attained this time  to 'pulverize' the peanuts and the sauce was quite thin. 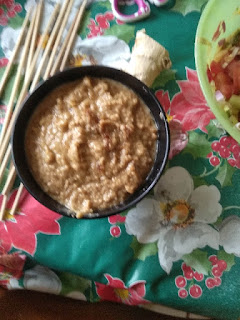 YOU are wating here the final result of the peanut sauce 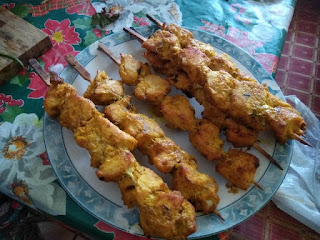 The news skerwers  are quite fat Above are the  grilled satays

The results  are now  better  than the previous . The sauce was more tasty while the satays were a little less wet as  the previous though of the same tast!e.

I Would like to hear your opinions.Pleaae  write them below!

Please support the author by sharing  this link!